In this report, we will explore the work presented in the paper "Rewriting a Deep Generative Model" by Bau et al. It shows a new way of looking at deep neural nets. .
Ayush Thakur

In the words of the authors,

"Deep network training is a blind optimization procedure where programmers define objectives but not the solutions that emerge. In this paper, we ask if deep networks can be created in a different way. Can the rules in a network be directly rewritten?"

The blind optimization procedure is investigated quantitatively in the paper "Deep Ensembles: A Loss Landscape Perspective" by Fort et al. Sayak Paul, and I explored this paper in this report.

The usual recipe for creating a deep neural network is to train such a model on a massive dataset with a defined objective function. This takes a considerable amount of time and is expensive in most cases. The authors of Rewriting a Deep Generative Model proposes a method to create new deep networks by rewriting the rule of an existing pre-trained network as shown in figure 1. By doing so, they wish to enable novice users to easily modify and customize a model without the training time and computational cost of large-scale machine learning.

-> Figure 1: Rewriting GAN without training to remove the watermark, to add people, and to replace the tower with the tree. (Source) <-

They do so by setting up a new problem statement: manipulation of specific rules encoded by a deep generative model.

If you are unfamiliar with deep generative models, here is my take on the same.

So why is rewriting deep generative model useful? 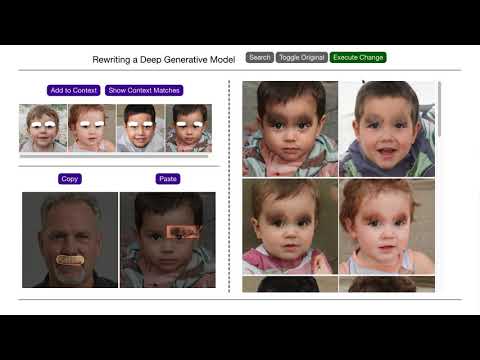 An Overview of the Paper

The usual practice is to train a new model for every new version(slightly different target distribution) of the same dataset. By rewriting a specific rule without effecting other rules captured by the model, a lot of training and computing time is reduced.

How can we edit generative models? In the words of the authors,

"..we show how to generalize the idea of a linear associative memory to a nonlinear convolutional layer of a deep generator. Each layer stores latent rules as a set of key-value relationships over hidden features. Our constrained optimization aims to add or edit one specific rule within the associative memory while preserving the existing semantic relationships in the model as much as possible. We achieve it by directly measuring and manipulating the model's internal structure, without requiring any new training data."

To specify the rules, the authors have provided an easy to use interface. The video linked above has a clear explanation of using this interface.

Try out the interface in Google Colab $\rightarrow$

2. The Analogy of Associative Memory

To add a new rule or modify an existing rule we will have to modify the pre-trained weights of layer $L$ which is given by $W_0$. The user will provide a single key to assign a new value such that $k_* \rightarrow v_*$. The modified weights matrix $W_1$ should be such that it satisfies two conditions:

Just like previous section point 5, this is a least square problem, however this time it's a constrained least-square(CLS) problem which can be solved exactly as:

From the previous section point 5, we can replace $VK^T$ at $W_0KK^T$. The modified equation is,

There are two interesting points of the last equation derived,

Note: $C$ is a model constant which can be pre-computed and cached. Only $\Lambda$ which specifies the magnitude of change depends on target value $v_*$.

4. Generalizing to a Non-Linear layer

So far, the discussion was done, assuming a linear setting. However, the convolutional layer of a generator or, in general, have several non-linear components like biases, activation(ReLU), normalization, style module, etc.

The authors have generalized the idea of associative memory such that:

The authors have expanded this idea to insert the desired change for more than one key at once. -> Figure 3: The copy-paste-context interface for rewriting a model. (Source) <-

Try out the interface in Google Colab $\rightarrow$ Putting it all Together and Ending Note

The authors have used the user interface and the idea behind rewriting generative models to showcase multiple use cases. Some of them are:

In the words of the authors,

"Machine learning requires data, so how can we create effective models for data that do not yet exist? Thanks to the rich internal structure of recent GANs, in this paper, we have found it feasible to create such models by rewriting the rules within existing networks."

This is truly a novel bit.

Thank you for sticking so far with this report. I wrote this report with the intent to provide an easy start with the paper. If something is still not clear or I made some mistake, please provide your feedback in the comment section.

Finally, this report showcases the rich writing experience one can get while writing such W&B reports. I hope you enjoyed reading it. Thank you.