In this report, we will discuss a new training methodology, namely supervised contrastive learning(SCL) introduced in https://arxiv.org/abs/2004.11362 by Khosla et al. This methodology is an adaption of contrastive learning in the field of fully supervised learning problems. The method uses label information to cluster samples belonging to the same class in the embedding space. On top of it, a linear classifier can be used to classify the images. This method is said to be outperforming cross-entropy. 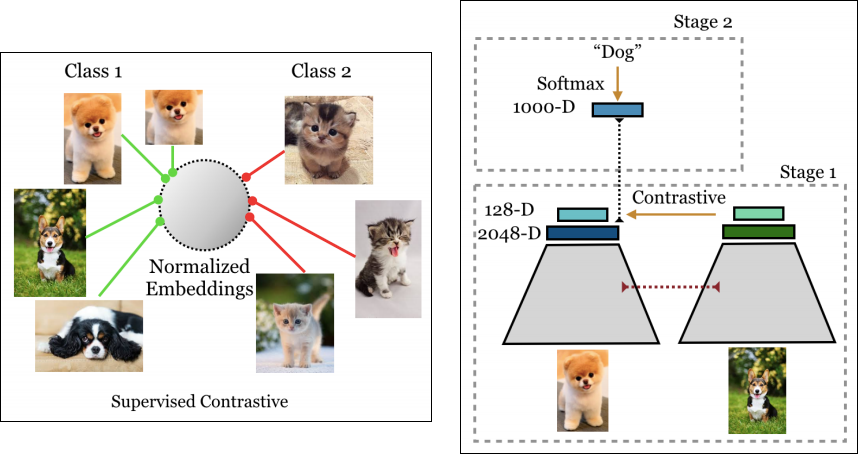 Here in this article, we will discuss the proposed methodology in detail, followed by running three experiments to check how it performs compared to Cross-Entropy.

​​Cross-Entropy is something that we are all well aware of. It is used as a loss function for classification problems to define any errors. ​​This measures the difference between two or more probability distributions. ​​Every prediction task has a predicted value of the machine, i.e., the value that the device assumes will be, and a real value, i.e., the value that the distribution will have. This error is then used to optimize the model and find the parameter's optimum values so that the predicted values are close to the actual values(ground truth values).

Having said this, one wonders, ** what is the difference between KL divergence and cross-entropy?** ​​The difference lies in the formula. Let's take a closer look at them. The formula for cross-entropy loss for multiclass classification is

N is the number of classes.

Coming back to cross-entropy, what it does is

Finding loss is an essential step because backpropagation starts in the network from here and pushes the values of the parameters in the right direction. This results in the best working network. By choosing a loss function that is not appropriate or does not work well, the model may collapse. ​​Still, cross-entropy has its problems.

To overcome these problems, one new approach has been proposed named Supervised Contrastive Learning. Let us see what is meant by contrastive learning.

The verbal meaning of contrasting is to compare in order to show differences. In contrastive learning, we contrast between similar and dissimilar things. ​​The machine can detect the differences between similar and varying things. For instance, let us imagine that the machine will have a binary classification problem, where it will be required to classify between cats and dogs while looking at an input image. So in contrastive learning, we will make the machine understand that.

We know that the neural network first converts the image into a representation, and then uses this representation to predict the result. So if the representations are formed, keeping the idea given above in mind, it will be easier for the classifier to give accurate results.

The proposed idea is divided into two steps:

Stage 1: In this stage, the network is trained using contrastive loss. Here the images are encoded in such a way that embeddings of similar classes are close and that of other classes are far. To do this, image labels are used. This stage has three components, namely data augmentation module, encoder network, and encoder network. These components are explained below separately.

Let us have a look at the components of Stage 1 of the training.

​​The authors used the same data augmentation policies used here in stage 2 to train the linear classifier. They found the best results with this practice.

​​For such a single input image, those same two stages result in two different augmented images. That means if there were N sample images, this stage would return 2N images.

It converts the representation vectors into a vector suitable for contrastive loss calculation. The authors used a multi-layer perceptron with a single hidden layer of size 2048 and an output vector of size DP = 128. The encoded vectors which we get as an output from the encoder network are fed into this network. The output of this network i.e., the projection vectors are normalized and then used in the loss function.

Once the output vector of this projection network is sent to the supervised contrastive loss function(explained below), the loss is calculated and minimized.

​​This whole operation is shown diagrammatically below.

The projected vector is sent to the supervised contrastive loss, which we will see in the next section.

$N$ is the number of randomly sampled images in a mini-batch. After passing these N images through the model in Stage 1, we will get 2N images.

$i$ is the index of an arbitrary augmented image within a mini-batch.

$j$ is the index of the other augmented image originating from the same input image.

$τ$ is a scalar temperature parameter, which is always positive.

$z_i$*$z_j$ computes an inner (dot) product between the normalized vectors.

Now to understand how this function is doing what it is expected to do, I would like to draw your attention to another topic called inner product, aka dot product. Look at the image below.

Here a & b are two vectors.

Now that we have seen all the components for supervised contrastive learning individually, let me quickly put all of them together in the next section.

Putting the Pieces Together

In this chapter, we introduce the proposed methodology, which will help people understand the methodology's full vision.

Let us look at all the components step by step.

Step 0: This is the preprocessing step of the dataset. Before starting with the images, we resize them to a fixed size 128X128X3(for example). We also normalize the images.

(From here Step i.j means the jth step of the ith stage.)

These vectors are finally normalized to stay in a unit hypersphere space. In the above section, we have already discussed why we normalize the projected vector before sending it to the loss function. But normalization is done at this stage as well. ​​As the authors have discovered various experiments, this standardization has always improved performance. This gave an output of shape (64,2048) which is the final output of the encoded network. This normalized encoded vector is sent to the projector network.

Step 1.3: The projector network is an MLP with one hidden layer of size 2048 and one output layer of size 128(as suggested in the paper, for our experiments we used a different architecture for the projection network explained in the next section.). This network will give an output of shape (64,128), which is, at last, normalized. The final normalized projected vector will have a shape (64, 128). From here onwards, the projected vector will be called z. Now the output of the projector network is sent to the loss function.

Step 1.4: At this step, the supervised contrastive loss function is used to find the loss. The output that we receive from the projector network is fed into this loss function. Let us look at the loss function again.

Inside $L^{sup}{i}$, we find the inner product of $z{i}$ with every other vector in the batch but with some restrictions. These restrictions are applied with the help of some terms. Let us look at them:

Now coming to the log term of $L^{sup}_{i}$, the numerator and denominator have $exp(z_i*z_j/z_k)$ term. This exponential term ensures that the log argument goes no higher than 1.

Once the loss is calculated, the optimizer comes to action. It tries to minimize the loss. The loss is minimized by maximizing the numerator and minimizing the denominator of the log term in the loss function. After the backpropagation, the model learns the parameter in a way that it can place images belonging to the same class closer and those belonging to different classes farther.

Once the training of this model is over, we discard the projector network and use the trained encoder network for the second stage of the training.

The input of this new network will be the same dataset. We will preprocess the dataset. The same image augmentation policies can be used here for data augmentation. In their paper, the authors reported that they got the best results when used the same augmentation in both the training stages.

Let us say the mini-batch size was 64. So the output of this network, which is the final output will have a shape (64,#classes). Once we get the output, this is sent to the loss function.

In the next few sections, we will present the results of the experiments we did with three different datasets: Flowers-5, Cats-vs-Dogs, and a subset of ImageNet. This would help us validate the efficiency of the supervised contrastive learning framework.

For this experiment, a subset of ImageNet is used, which can be found here. This dataset has 1250 training images and 250 test images belonging to five classes.

This experiment was done both with and without augmentation, and the results for both the cases are discussed below. We did not use AutoAugment as proposed in the paper (AutoAugment produced the best results). We used the following augmentation operations:

For the $1^{st}$ stage of training, the encoder network architecture was similar to the other two experiments' encoder network. However, the projector network had 256 neurons instead of 128 neurons.

We tested this methodology with

​​The table below summarizes the Supervised Contrastive Loss (produced in stage 1) and the Final Training as well as Validation Accuracy (produced in stage 2) with different optimization techniques, beginning to learn rate strategies and incremental schemes. Recognize that many of the experiments require an early stoppage, but some of them do not. Please check the code for some more details.

Let us look at the graph of all these results in the observation section, which we logged using wandb.

Experiments on the Flowers-5 Dataset

We tested this methodology with and without data augmentation. We only used Adam optimizer with a Cosine Decay on the learning rate in this case.

Experiments on the Flowers-5 dataset

Experiments on the Cats-vs-Dogs Dataset

No data augmentation was performed.

For the $2^{nd}$ stage of training, the Dense layer had 1 neuron as the dataset had 2 classes (binary classification problem).

We only used Adam optimizer with its default configuration in tf.keras.

Experiments on the Cats-vs-Dogs dataset

To further justify the efficiency of the SCL framework, we took the embeddings from the encoder network and visualized them using t-SNE. Below you can see that it has been able to learn quite discriminative representations of the ImageNet subset that we used. We got similar results for the other datasets as well.

In this final section, we want to provide you with a gist of the things that worked for us on the different datasets we experimented with -

SCL also gives us a tremendous opportunity to use the encoder trained on the ImageNet dataset and use it for transfer learning purposes. Frameworks like this typically benefit from more and more time and longer training. It's almost always safe to train go for a longer stage 1 training when you have more data.

When you have a good amount of labeled data, it's worth giving SCL a try. But there's the catch. SCL still needs labeled data in order to shine which may not be always available.