In this article, we’ll review and compare a plethora of weight initialization methods for neural nets. We will also outline a simple recipe for initializing the weights in a neural net.

A summary of the different weight initialization methods

Why does weight initialization matter?

The performance of a neural net depends a lot on how its parameters are initialized when it is starting to train. Moreover, if we initialize it randomly for each runs, it’s bound to be non-reproducible (almost) and even not-so-performant too. On the other hand, if we initialize it with contant values, it might take it way too long to converge. With that, we also eliminate the beauty of randomness which in turn gives a neural net the power to reach a covergence quicker using gradient-based learning. We clearly need a better way to initialize it.

Careful initialization of weights not only helps us to develop more reproducible neural nets but also it helps us in training them better as we will see in this article. Let’s dive in!

We are going to study the effects of the following weight initialization schemes:

Finally, we are going to see the effects of the default weight initialization scheme that comes with tf.keras.

Experiment setup: The data and the model 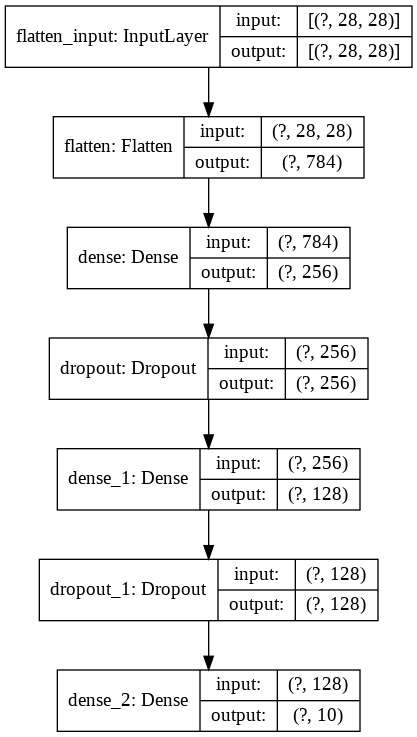 The model would take a flattened feature vector of shape (784, ) and after passing through a set of dropout and dense layers, it would produce a prediction vector of shape (10, ) which correspond to the probabilities of the 10 different classes present in the FashionMNIST dataset.

This would be the model architecture we will be using for the all experiments. We will be using the sparse_categorical_crossentropy as the loss function and the Adam optimizer.

Method 1: Weights initialized to all zeros

Let’s first throw a weight vector of all zeros to our model and see how it performs in 10 epochs of training. In tf.keras, layers like Dense, Conv2D, LSTM have two arguments - kernel_initializer and bias_initializer. This is where we can pass in any pre-defined initializer or even a custom one. I would recommend you to take a look at this documentation which enlists all the available initializers in tf.keras.

We can set the kernel_initializer arugment of all the Dense layers in our model to zeros to initialize our weight vectors to all zeros. Since the bias is a scalar quantity, even if we set it to zeros it won’t matter that much as it would for the weights. In code, it would look like so:

Model performance with all weights initialized to all zeros

Method 2: Weights initialized to all ones

Method 3: Weights initialized with values sampled from a uniform distribution

If you think from a mathematical view point, a neural net is nothing but a chain of functions applied on top of each other. In these functions, we generally multiply an input vector with a weight vector and add a bias term to the product vector (think of broadcasting). We then pass the final vector through an activation function and then proceed from there. 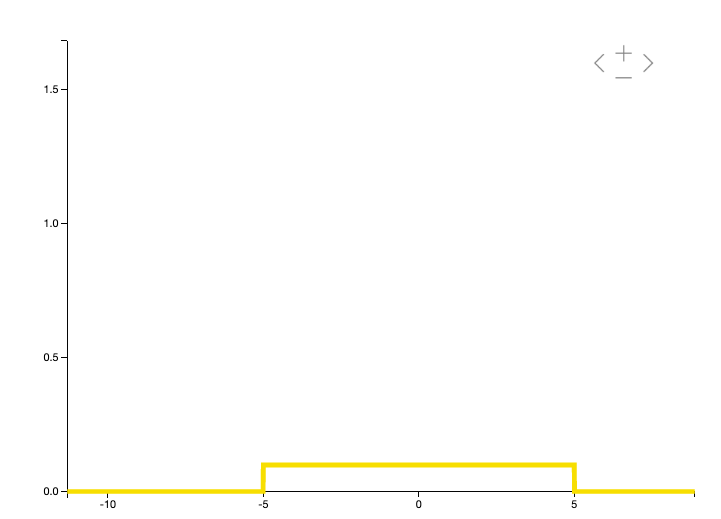 A uniform distribution within [-5, 5] range

Initializing a tf.keras Dense layer with a uniform distribution is a bit more involved than the previous two schemes. We would make use of the tf.keras.initializers.RandomUniform(minval=min_val, maxval=max_val, seed=seed) class here. In this case, we would be supplying 0 as the minval and 1 as the maxval. seed could be any integer of your choice. Let’s see how it performs!

Let’s see how it performs!

The Results So Far - Ones vs Uniform Weights Accuracy Trade Off

As we saw in the previous experiment that having some randomness when initializing the weights in a neural net can clearly help. But could we control this randomness and provide some meaningful information to our model? What if we could pass some information about the inputs we would feed to the model and have the weights somehow dependent on that?

We can do this! The following rule (from Udacity’s lesson on Weight Initialization) helps us in doing so:

Method 4: Weights initialized with values sampled from a uniform distribution with a careful tweak

So, what we would do is instead of sampling values from a uniform distribution of [0,1] range, we would replace the range with [-y,y]. We have got a number of ways in which we could do this in tf.keras but I found the following way to be more customizable and more readable.

Let’s see how this performs

Method 5: Weights initialized with values sampled from a normal distribution with a careful tweak

As can be seen in the following figure (which mimics a normal distribution) most of the values would be concentrated in the mean value region. In our case, this mean value would be 0 so, it might work as we are thinking. 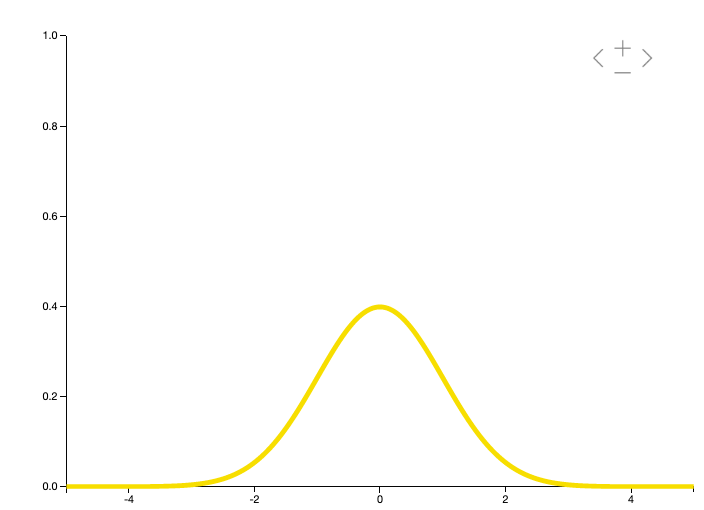 The code for initializing the weights with this scheme would be pretty much similar, we are going to swap the uniform rule with a normal one -

Here's how it performs

Effects on training with careful initialization

Let’s now see how different initialization methods affect the parameters of our network as it trains. Let’s take the uniform initialization (with [0,1] range) scheme first. TensorBoard (a tool by the TensorFlow team for visualizing and debugging machine learning models) allows us to visualize the learned parameters of a model in histograms and distributions. We will stick to histograms for this article.

Histograms of the learned parameters of our network visualized in TensorBoard. 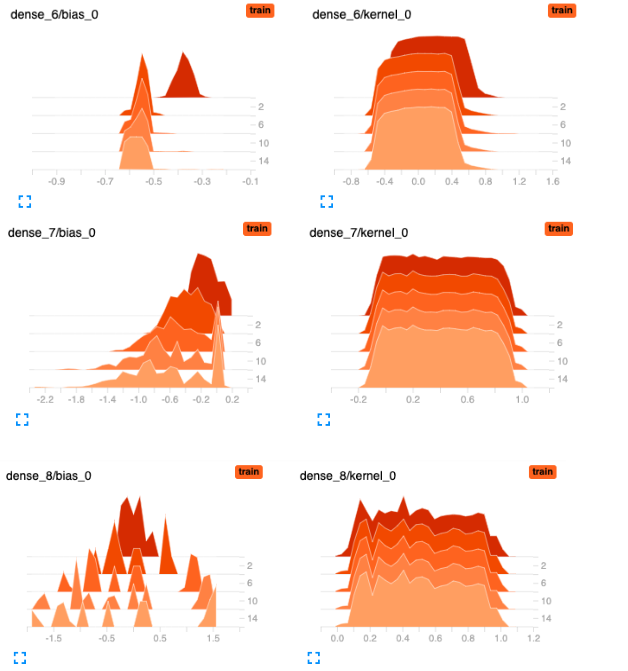 Histograms represent different brackets of values with respect to their occurences. In the above figure, we can see that most of the weights across the different layers are well spread out across the range of [0,1]. Here are the histograms of our network initialized with the uniform distribution but with the recipe:

Histograms of the learned parameters of our network initialized with a uniform distribution but with the recipe. 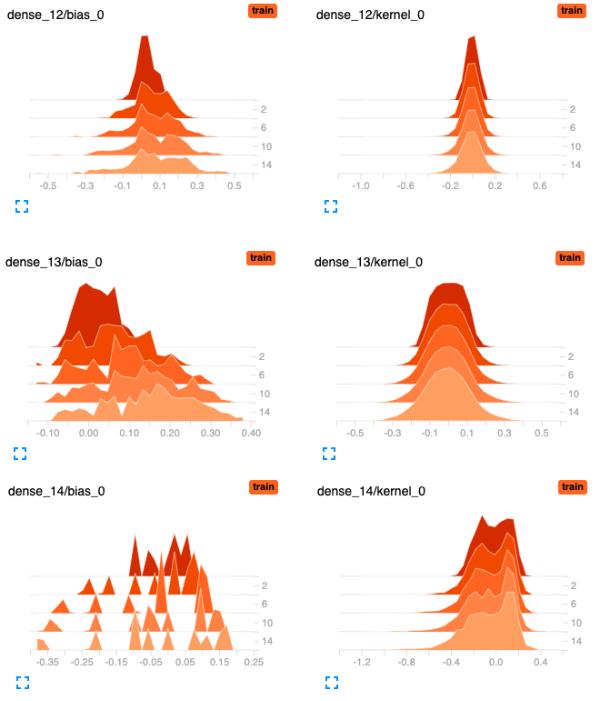 We can clearly notice that when our network is initialized with the constrained uniform distribution the dispersion in the weight distribution is less and most of the values are are closer to zero which is what we wanted.

I encourage you to try out this observation with the other methods we discussed. Weights and Biases makes it extremely easy to sync up your TensorFlow event files so that you can host TensorBoard instances in your Weights and Biases run page itself. I will not go into the code for this portion in this article but you if you're interested, check out the colab notebook →.

Some tips and last thoughts

Thanks for sticking with me throughout the article. The study of weight initialization in neural nets is indeed very interesting to me as it plays a significant role in training them better. As a fun exercise, you might also see what is the default initializers in tf.keras when it comes to the Dense layers and compare the results to the ones shown in this article.

By now, you should have a mindset that would help you to systematically investigate why your neural net might not be training well. Practically, there can be a lot of reasons for that but weight initialization is definitely one of them. You now have a list of goto initializers that you would experiment with.

Also, I wanted to share some very good references which you can look up if you are interesting in studying more about the topic. This study gained popularity with seminal paper named Understanding the difficulty of training deep feedforward neural networks by Xavier et al. It was then studied quite well by Kaiming et al. in their paper Delving Deep into Rectifiers: Surpassing Human-Level Performance on ImageNet Classification. That same year, Dmytro et al. published a paper named All you need is a good init where they proposed a very simple yet effective weight initialization scheme called Layer-wise Sequential Unit Variance (LSUV). LSUV has shown tremendous performance improvements on deeper architectures and has easily become a favorite choice among the practitioners. There’s also some study on weight-agnostic neural nets by Adam et al. in their paper Weight Agnostic Neural Networks but it is yet to get the amount of the attention the earlier schemes have got.

Selecting the right combination of weight initialization method and activation function is also an important study and I highly recommend reading this deeplearning.ai article if you are interested to know about it.

I am highly indebted to Jeremy Howard and his team at fast.ai because it was fast.ai’s course Deep Learning from the Foundations (taught by Jeremy himself) which triggered my interest to study the topic of weight initialization. If you haven’t checked out the course yet, take the time to do so.

I hope this article gave you a sense how important role a weight initialization method plays for training a neural net. I am excited to see if it helps in improving the performance of your custom neural nets too.

Try various weight initialization methods in Colab for yourself →.