Towards Self-Supervised Image Understanding with SimCLR

An exploration of the SimCLR framework by Chen et al, in which the authors present an effective framework for training vision models in a self-supervised way.
Sayak Paul

This year, Chen at al. published their paper A Simple Framework for Contrastive Learning of Visual Representations (SimCLR for short), which presented a simpler yet effective framework for training computer vision-based models in self-supervised ways.

In this report, I will present some findings from a minimal implementation of SimCLR I did with a subset of the ImageNet dataset.

Check out the code on GitHub → | Read The Paper →

The Idea of Self-Supervision in Computer Vision

It was when I read this amazing introductory post on self-supervised learning by Jeremy Howard I could really appreciate the kind of benefits one could get out of self-supervised learning systems for computer vision-based problems. If you are already familiar with the idea of word embeddings then extending that understanding for computer vision-based scenarios might be helpful.

For training models in a self-supervised way with completely unlabeled data, one needs to first frame a supervised learning task (also known as pre-text task) with that unlabeled data. For example, for training word embeddings on a large corpus like Wikipedia, you might go with the task of predicting the next word given a sequence of words. So, how you might extend this idea when it comes to dealing with unlabeled images?

It's important to note that the contrastive prediction task should be not too easy nor difficult and it should help the model develop an understanding of the given data (think of how embeddings capture the semantic relationship between related words). For vision-based problems in order for the model to develop that sort of understanding the following tasks have known to work:

You can know more about it from here.

The idea of self-supervision in computer vision

So, the premise here is once effective representations are learned out of the unlabeled images that reflect more on the image understanding part, those representations can be used to downstream tasks such as image classification effectively. Once a model on a given pre-text task has been trained, it can be used without the upper layers that might have been specific for the pre-text task.

So, an obvious idea here would be to take image datasets like ImageNet, OpenImages (without their labels), train a model using the above-mentioned pre-text tasks, unplug the upper layers of the model and use the learned representations for downstream tasks.

Now that we have a brief idea of how self-supervised learning paradigms can be applied to computer vision, let us discuss what loss functions can be used to help a model learn effective representations in self-supervised ways.

While training a model for the pre-text tasks mentioned above, we may often have to mess with the images i.e. colorizing the images, omit certain pixels from the images, change the orientation etc. While doing so to ensure a model is learning consistent representations we need to devise a way to tell the model that the following kinds of pairs of images are similar to each other (comes from the SimCLR paper) -

Contrastive loss is used to tell a model that the above kinds of pairs of images are similar to each other. Why this might be useful?

So, the contrastive loss helps a model to remain consistent when learning the representations even when the supplied data is messed up. Now, of course, it will also need to be able to distinguish when the images are actually different, consider the following figure for example (comes from here).

So, at this point, two things might really help us in developing a good self-supervised learning system -

In the SimCLR paper, the authors first show that data augmentation has a significant role to play when devising the pre-text task. They first randomly sample a mini-batch of unlabeled images, apply a stochastic data augmentation policy (more on this in a bit), and basically train a model to bring similar images together using the so-called Normalized Temperature-Scaled Cross-Entropy Loss (NT-XEnt loss).

The following figure summarized the SimCLR framework (taken from the paper) - 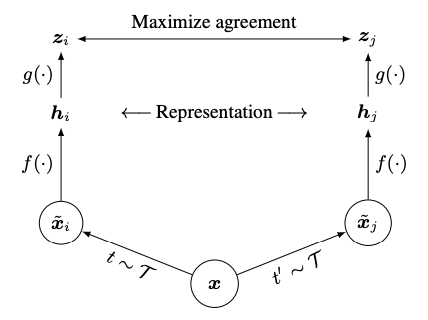 And at the same time, the following ones are dissimilar (comes from here) -

In the next section, we will discuss one of the major components of the SimCLR framework - data augmentation!

The authors presented a detailed ablation study in the paper about these different augmentation policies and the effect they have on the pre-text task. They state the following points about the role of data augmentation in self-supervised learning (for computer vision) in general -

While the following examples denote the negative examples (comes from here) -

Returning to the loss function

The authors used the NT-XEnt loss pretty cleverly. As opposed to using any memory queues or memory banks (as used in MoCo and PIRL respectively), they let the loss function take care of segregating the positive pairs from the negative pairs. The loss function looks like so -

A detailed explanation of the loss function is available here. For measuring the similarity between the non-linear projections ($z$) of two images the authors used cosine similarity whereas once can use dot product as well.

The Framework Until now

While using custom datasets, it's important to experiment with the different augmentation operators to create an augmentation policy that makes the prediction task neither too easy nor too difficult for a model to learn.

Here's how the encoder network looks like with non-linear projections -

Enough talking, show me the results!

Linear Evaluation of the Learned Representations

Here's how the network looks like without any non-linear projections -

Here's the general workflow in code for linear evaluation -

Linear evaluation of the learned representations

From the plots, we see that the representations from the network that did not have any non-linear projections yielded the best results and in our case, it also converged faster. You see the uneven steps across different runs because I set up an EarlyStopping callback to prevent overfitting. In Section 4.2 of the paper, the authors present more commentary on the use of non-linear projections for improving the quality of the representations.

Below you can see the lower-dimensional versions of the learned representations taken at different levels of non-linear projections.

Visualization of the Learned Representations

Visualization of the learned representations

We can already see some sort clustered formations in the above plots which is an indication that our model is indeed learning to group similar images together. Finally, we compare the performance of this framework with a supervised classifier trained on the full training dataset.

Training With the Full Training Dataset in Fully Supervised Manner

Below, I present the performance gained from this model -

Training with the full training dataset in fully supervised manner

We see that compared to this model's performance, the linear model trained using the representations learned using the SimCLR framework performs quite close even with 10% of (labeled) training data. I used Early Stopping in order to prevent overfitting that is why we see different numbers of epochs for the two different runs (supervised-training and linear-eval-no-projections).

As mentioned in the paper, SimCLR benefits from larger data and longer training. This is why it achieves great performance on transfer learning and fine-tuning tasks when trained with the ImageNet dataset.

When plugging in your custom dataset, here are a couple of things to keep in mind -

Thanks to the ML-GDE program for granting me GCP credits that were used for running a number of different experiments for this report. If you have any feedback to share don't forget to reach out via Twitter (@RisingSayak).