I trained a robot to play The Witness 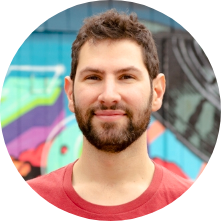 Spoiler Alert: I discuss major plot points of the game while describing my model.

In the game The Witness, players solve puzzles by tracing patterns that begin with circles, and continue in continuous line to and endpoint point. At first these patterns appear only on panels, but players eventually realize that the entire island is filled with these patterns, and the real goal is to recognize these patterns in the surrounding environment. And after finishing, many players, myself included, began seeing these patterns in the real world as well.

I trained a deep learning model to identify and label those puzzle patterns in The Witness screenshots. I'm an experienced web engineer but new to machine learning, and I'm particularly interested in machine learning for artistic and creative purposes. This seemed like a simple enough entry point where I could learn a bit about deep learning techniques and generate some interesting results along the way.

I was able to achieve some promising results! In this post, I'll walk you through the process I took to get there. I've also published a reproducible repo with the project, and would be thrilled if other Witness fans would want to collaborate to improve the project.

Gathering Data and Refining the Task

First, I went through the game and took several screenshots of each environmental puzzle: about 300 in total. Thanks to IGN for this comprehensive guide to the locations of all the puzzles, and SaveGameWorld for a save file so I didn't have to actually gain access to all the locations again! I made sure to capture screenshots from different angles, plenty of positive examples with the puzzle fully visible, and negative examples where parts are obscured or interrupted.

I created the training labels for each of these screenshots manually, in Photoshop. To make things faster, I created an Action to automate the repetitive steps. I used the "Select & Mask" tool to manually select the puzzle area, if one was present, and then triggered an Action to convert the selection mask into a black and white image, and save it as a PNG in the "labels" folder.

One of the most interesting aspects of machine learning in my experience has been how the process of developing the code can result in several iterations of reframing and redefining the problem at hand. My initial framing of the problem: "Identify and label environmental puzzle patterns matching the rules of The Witness," turned out to be imprecise. Many situations arose upon building the training set that challenged me to refine the definition of what portions of the image should be labeled as a puzzle.

For the circular shape that begins every puzzle pattern:

And for the line that comprises the rest of the pattern:

At the heart, this task is commonly called "semantic segmentation". The model must label which pixels of an image belong to a certain type of object. I chose a model architecture commonly used for this kind of task, the U-Net, which was initially developed for segmentation of medical images.

A U-Net has a contracting path, or encoder (the left side of this image), which develops feature detection capability through several layered convolutional layers, and an expanding path, or decoder (on the right), which creates a semantic map of the entire input image by merging the feature information from the bottom of the U with locational information from the contracting layers.

I used U-Net example code to get started.

You can run the code yourself, no experience necessary!

# Init on W&B to save your run results
wandb init

# Split data from /data/all into a training and validation sets
./process.py

# Train your model, and save the best one
./train.py

# Output the prediction for all examples in the validation set
./predict.py

I used a p3.2xlarge instance on Amazon EC2 to run the training. These instances all have GPUs for much faster training. I used the Ubuntu Deep Learning AMI, which pre-installs all the commonly needed python libraries and binaries.

Even the very first run yielded informative and promising results. I've written up a W&B report exploring my results.

After saving the best performing model, I used the predict.py script to identify examples where the training data was incorrectly labeled or ambiguous, or where the game itself made for a particularly challenging example. In each of these examples, the top left is the screenshot, bottom left is prediction, bottom right is my hand-created label, and the top right is a composite of the label and prediction. In the composite, white indicates true positive, red indicates false positive, and blue indicates false negative.

In this case, the model is identifying two puzzles that I had missed in my initial round of training data. One, on the left, is a unique case where the circle continues into a line that then expands into a wide-open region (the ocean). I hadn't considered that valid until it seemed clear that the rules should include the region of the line up until the point where the width exceeds acceptable parameters. On the right is a circle with two potential lines emerging from it, which I had neglected to label in the training data.

Here's a case in the validation set where I accidentally labeled a puzzle in the training set, whereas in fact the color difference between the circle and the line is too great. The model correctly declines to label the region as a puzzle.

In this case, the model incorrectly labels these two regions as a puzzle, despite the fact that the circle area is partially obscured. The circle must always be complete and unobscured for an acceptable puzzle region.

This case shows a false positive, where the model finds an almost-correct region where the circle is partially obscured.

In this case, the model correctly identifies the three complete puzzles (left and top right), but is challenged by the bottom right example, where the circle lies partially outside the viewport.

Based on the confounding cases above, I refined the training data to remove mask errors and clarify the rules used to generate training data. Here's a W&B report showing the improvement from Run 1 to Run 2: accuracy clearly increases!

I ran into a weird problem where many of my runs were getting stuck without learning anything, seemingly non-deterministically. Thanks to some help from my colleagues, we identified that sometimes, based on the random seed, the training was unable to explore outside of the local minimum of an empty prediction: since most positive labels would be incorrect and increase loss. Using the weighted cross entropy loss function, weighting the algorithm to prefer positive predictions to negative ones, resolved the issue.

I also experimented with the number of "tiers" in the U-Net, based on the intuition that the 5-tier example might be too large for the problem. You can see a report comparing these hyperparameters here. One learning was that more compact models learned more slowly on the training set, but performed better on the validation set, implying that they are worse at memorizing but are generalizing better.

One of the most interesting parts of machine learning for me is investigating the inner structure of a trained model to discover meaningful emergent forms and behaviors. I wrote a script, visualize.py, that breaks down a simple 3-tier version of the U-Net and visualizes the intermediate layers of the trained neural net.

In most deep convolutional neural nets, the earlier layers tend to learn to encode fine patterns, whereas the later layers, closer to the desired output, tend to encode more semantic meaning. You can see this pattern in this network as well.

Deep in the neural net (layer 12 at the bottom of the U) the cells become more difficult to parse, as they're capturing very small snippets of regional information.

And as you get towards the end, you can see that the network has identified many meaningful portions of this image. Many cells have identified the puzzle pattern. Others call out sky, fence, or flowery regions.

Even more interesting is when you visualize the output of a single cell in the network across all examples in the dataset. Here's a cell in layer 12 that's learned to identify sky regions, but also identifies the puzzle in a few cases.

Here's one cell in layer 19, the second-to-last layer, that has clearly learned to identify the puzzle pattern in most of the example images.

And another cell in the same layer that seems to be identifying the edge region around the puzzle in most examples.

To increase and improve the training data, we have a number of options.

There are also a number of ways to improve the algorithm and model:

The original intention of this project was to find The Witness patterns in the real world, like in the WitnessIRL reddit thread. I ended up reducing the scope of the project, as identifying the patterns in screenshots was challenging enough, and the ~100 images in that thread is not a sufficient training set to make meaningful progress. However, with a model trained on game screenshots, I believe transfer learning could be used to get a head start on a model that detects the patterns in real-world photos. The dream would then be to run the model on a large image dataset: for instance the Flickr Creative Commons 100M photo dataset. Imagine how many puzzles we could find!

If this project seems interesting to you, let's collaborate to improve the model performance, improve the training data, and possibly expand it to real world imagery! The example repo is here with instructions to replicate the process.

If you get it running and get improved performance, please submit it to our benchmark to claim the high score, and submit it as a pull request to the repo to advance the project. And let us know via twitter or email if there's any way we can help.