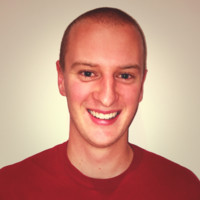 I’m using graph convolutional models to predict protein structure and interactions between different proteins. I use visualizations of gradients to track the heartbeat of my models, make architectural adjustments, and diagnose problems during training.

My background is in biology, and I’m using machine learning to solve hard problems in genetics. In my undergrad research I used statistical methods to explore the interplay between an organism’s genetic makeup and its environment, and when I got to Stanford I jumped at the chance to deepen my understanding of machine learning. It was challenging to get up to speed with the math, but implementing models from scratch in CS 231n and CS 229 gave me a strong foundation. I’m now using machine learning techniques every day in Polly Fordyce’s lab, working to better define and predict molecular interactions.

My graduate research specifically focuses on the biophysics of molecular interactions. A fancy way of saying that I predict how tightly proteins stick together in living organisms. Processes governed by the interactions between two or more biological molecules are responsible for an amazing array of different functions. These interactions are:

To understand how deep learning can apply to comprehending, and ultimately designing, these interactions, we first have to understand a bit more about how proteins are constructed.

An example of an important intermolecular interaction: an antibody in complex with a short protein sequence from the human rhinovirus (PDB ID: 1A3R)

Proteins are composed of long chains of amino acids, small chemical compounds also referred to as “residues”, strung together like beads on a string. Only 20 of these amino acids comprise the set from which proteins can be constructed. However, despite such a limited alphabet, nature has been able to devise proteins that perform a dizzying array of functions, from binding and regulating other proteins to synthesizing chemicals critical to sustaining life.

Proteins accomplish these myriad tasks through differences in their three-dimensional structure. The structure, in turn, is ultimately defined by the chemical properties of the amino acids themselves and the order in which they are strung together. For instance, the core of most proteins is usually where we find the hydrophobic (“water-hating”) amino acid residues, while the protein's surface is more likely to have more hydrophilic (“water-loving”) residues. In a world made of water, it's generally best for the water-hating amino acids to hide on the inside of the protein. These chemical properties help define the protein’s structure, which determines its function by positioning key functional residues. The functional residues might reside on the protein's surface, as with many binding proteins, or in its core, as with many enzymes -- proteins that catalyze chemical reactions.

Now that we know a bit about protein sequence and its connection to protein function by way of structure, it sure seems like it would be nice if we had a model to connect the sequence of a protein’s amino acids to its fully-folded 3D structure. Unfortunately, this is an incredibly challenging task that remains one of the largest open problems in computational biology. Despite recent progress by DeepMind and others, we remain a long way from a generalizable model to perfectly predict a protein’s structure from its sequence alone.

Although the protein folding problem is far from solved, there are many proxy measures of structure that can still provide useful insights into potential function. Contact maps are one of the most widely used methods to abstract away the important components of a folded protein without having to predict the full structure. Contact maps are simply 2D binary matrices where each row and column represent one amino acid in the protein. If a contact of a certain type (for example a covalent bond or a hydrogen bond) exists between two residues, the value at that point in the matrix is one, otherwise, it is zero. Since these contacts are undirected, contact maps are symmetric about the main diagonal. Contact maps can be significantly easier to predict that complete 3D structures because of the correlation between contacts in local regions and the projection of the problem from three dimensions into two. These maps still retain information relevant to protein function such as the position of potential binding pockets and local structure. Consequently, I have decided to predict multi-channel contact maps from the protein’s sequence alone, with the hope that these contact maps will serve as a useful intermediate when dissecting the strength and mechanism of protein-protein interactions.

An example of a contact map. On the left is the contact map predicted by a deep learning model. The ground truth map is shown on the right.

One of the most interesting and frustrating parts of my research is having the freedom to play around with novel deep learning architectures. I find it endlessly rewarding to read a paper, implement the paper’s new method in PyTorch, and see the results (good or bad) for the prediction task I’m trying to solve. However, not all new methods are right for my problems, and even the ones that can help significantly often don’t work perfectly on the first try.

The toughest part of my job is resisting the temptation to be a glutton for novelty. Shiny object syndrome is real and in a world like academia, where deadlines can be much more of a suggestion than a requirement, it can lead to months spent chasing a new method that offers no improvement for your prediction task. As a result, I’ve learned to be very careful when deciding whether to pursue any new method. I try my best to allow the data structures, and the biological processes that generate them, to help guide my decision whether to change direction or hold the course. Before I implement a single new line of code, I like to ask myself:

In the case of predicting contact maps for protein-protein interactions, graph convolutional networks (GCNs) meet all three of these requirements. The atoms that make up proteins are connected by sets of bonds and each atom is not bonded to a uniform number of partners. Therefore, a graph better approximates the natural data structure of proteins than a 2D or 3D CNN would. GCNs also offer a significant performance gain over 2D CNNs for the specific problem of contact map prediction. Whereas 2D CNNs would, in effect, be predicting the same value twice in the case of symmetric contact maps, graph convolutions can be designed to predict each contact only once, leading to dramatic improvements in memory efficiency.

GCNs represent a relatively new and rapidly evolving area of study in deep learning. As a result, the processes of implementing and using these architectures can be a fair bit harder than for established tasks like using a CNN on image data. I’ve run into a number of interesting and puzzling failure modes, including constant prediction of the mean value, overflow of parameter values producing NaNs, and even complete failure to train. Each failure mode has required its own unique debugging process, but there’s one technique I’ve found to be indispensable across all failure types: visualizing patterns within a model’s gradients.

Why might you want to visualize the distribution of the gradients within your model? The answer might not be immediately obvious, given that you are already tracking your target metrics like loss or accuracy. But what do you turn to if you see no improvement in these standard measures of performance? Here I’d like to remind you of the update rule that your optimizer is using every step it takes:

Where Θ is your parameter, α is your learning rate, and J is the loss function for the current batch or example. Now it may be a bit more obvious why we are interested in tracking gradients as our model trains: the only two values affecting your parameter updates are your learning rate and your gradient. Since the learning rate is usually fixed (though this isn’t always the case for all optimizers), the gradients generally dictate the direction and magnitude of a given update.

Since the gradients are being used to update the parameters, you might ask, “why not just look at the parameters of the model directly?” The answer is that gradients are information-rich and they have the same interpretation no matter where you are in the training process. The gradient will always tell you the direction and “steepness” at your current location in the optimization landscape. If you are near a local optimum, gradients will generally be smaller than if you are far from a local optimum. Moreover, methods like regularization exist to directly control the scale of the parameters, but the scale of the gradients is far harder to directly control as the experimenter.

Over time, you should expect all of the gradients to trend toward zero as your model’s parameters approach a set of (locally) optimum values. If you notice the variance of your distribution of gradients trending upward as your model trains, you may want to take steps such as lowering the learning rate or introducing regularization to ensure you do not overstep the optimum.

As you approach an optimum value for your model’s parameters, you should see the histogram of gradients shrink toward zero at the same time that you see your loss and/or accuracy begin to plateau. If the gradients are shrinking and the accuracy/loss is not where you would expect, that may be an indication that you’ve reached a local optimum and might be trapped. In this case, increasing the learning rate or relaxing regularization constraints might be helpful.

One final pattern that is often worth examining is the scale of the gradients themselves. Because the gradient is the derivative of the loss function with respect to the parameter, parameters for which a small change would drastically change the loss of an example would be expected to have a large derivative relative to that of an unimportant parameter. Paying attention to the relative scale of different layers of module of your network can tell you a lot about which components might be critical for accurate prediction versus those playing only a minor or supporting role. If you notice a difference of an order of magnitude or more between the gradients flowing to different parts of your model, that may be an indication that a certain module may not be critical, and in some cases may be actively detrimental to network performance.

In the example below, you’ll have the chance to play around with a network that contains an unnecessary module that injects random noise. You’ll be able to see for yourself the effect of unimportant components on network performance during training.

Weights & Biases offers a great, easy to use tool to directly track and visualize histograms of your gradients as your model trains. By just including wandb.watch(model, log='all') before your training loop, you’ll be able to have W&B display histograms of both your model’s parameters and their gradients at each update step. Hopefully, you’ll be able to use some of the tricks I discussed here to shortcut debugging of your next model!

Since most people don’t work on problems related to protein folding, I've implemented the following Google Colab Notebook for you to play around with gradient visualizations yourself. Click “Open in playground” in the upper left corner to interact with the model yourself. Try adjusting the learning rate, batch size, momentum, etc. to get a feel for the effect on the spread and magnitude of the gradients for each model.